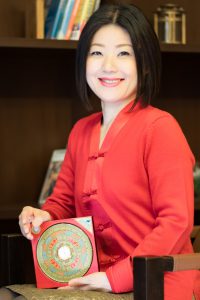 After having studied with several Feng Shui teachers in Japan, Kazue has finally got advanced knowledge of Flying Star Feng Shui – globally accepted as the “Real Feng Shui” – though apprenticing internationally famous masters.

During 2011- Spring of 2019, Kazue was a member of the International Feng Shui Association located in Singapore.

Kazue has organized Feng Shui Salon ACQUARIA for providing private consultations by using one or a combination of; the Flying Star method, Four Pillars of Destiny, I-Ching Divination, and other skills and techniques related to The Five Arts including Chu Shin Qigong. Kazue’s consultation of Four Pillars of Destiny is very popular as the careful reading. Clients are able to get all the details straight about their own destinies.

Consultations and workshops of Feng Shui and Qigong are held worldwide; mainly in Japan, Hong Kong, Singapore, Italy, Germany, the UK and the US, in Japanese, English. Kazue’s consultation is known for its practicality (sensitive to international protocol and local culture), adaptability (which builds upon the client’s original interiors) and originality (based on A-Ray Style Chu Shin Qigong).

Since 2014, Kazue has organized Feng Shui study tour on an annual basis to observe and experience “Real Feng Shui” around the world, which is very popular for her students and clients.

For 2015-2017, Kazue has lectured Chinese Cosmology (Chinese Metaphysics) at Funai Media / Eva Vision. Students can learn not only the essence of Flying Star Feng Shui method – how much powerful and effective “real Feng Shui” is – , but also all knowledges of the Five Arts systematically and comprehensively. Kazue’s special lecture “Flower of Romance class” provided repeatedly both at Funai Media and her own office is especially popular.